We have our little peculiarities.

At the height of a chaos we find a reason to have a good laugh.

Instead of saying “hello” on the phone, we greet each other with our reverberating laugh. We derive amusement in situations where others feel boredom. We provide ice breakers in a room filled with an atmosphere of tension.

Methinks our being biophiles is responsible for these eccentrities. Yes, Rafael “Paeng” Morada Jr. and I are legitimate lovers of life! It’s no surprise if we remain imaginative in finding ways to look at things in a different light especially at this time of global health crisis. Fact is, even before this covid-19 pandemic, we had our ingenious style of enjoying what life offers us.

Indelible instance was our mutual agreement to have an overnight stay in Las Casas Filipinas de Acuzar in Bagac, Bataan on January 25-26, 2019.

It was a whimsical decision since both of us were in dire need of a diversion from the onslaught of mounting stressors that month. My wandering self quickly agreed to take the adventurous trip to Tarlac City alone via bus from Cubao terminal. With Paeng’s detailed instructions, I succeeded in arriving at their gate on time and in one piece. We ate our lunch while we waited for Joshua, their on-call personal driver. Fernando “Pogs” Ocera Jr., Paeng’s beloved better half and Coco, their four-month old thoroughbred Chow Chow would be joining us in this super special excursion. They did not take the risk of leaving the stuffed toy-looking pooch in their house for fear that his Tazmanian Devil itch would leave them homeless afterwards. Hahahaha…

Travel from Tarlac City to Bagac, Bataan was more than two hours. With Waze’s accuracy and Joshua’s driving flair, we reached the place before check-in time at 3:00 pm.

Registration was accomplished in the reception building, Casa New Manila, the first casa or house that we entered. Around 20-30 minutes passed, we were brought by a jeepney to Casa Lemery, our house for the duration of our stay. 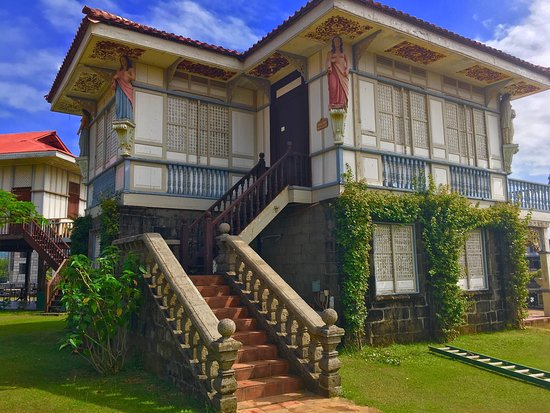 The facade of the two-storey casa got me transfixed at once. An admirer (but not an authority) of historical architecture, I could see traces of Philippine artistry especially on the columns and staircase balustrade. I had not yet recovered from my initial amazement when I got hit by a second wave upon entering my own room, which is at the ground floor.

Wow…wow…and another wow! Paeng didn’t forget my “royal” lineage or rather my “illustrado” blood when he picked this house. Hahaha.

Seriously, Paeng’s decision to book this casa is because of Coco. The resort only allows bringing of pets in private casas. So, thanks to Coco, we had the luxury of occupying one of the very artistically designed houses. Yay!

We rested for a few minutes, admired the interior of Casa Lemery, took some bites of the complimentary snacks, and wallowed in the beautiful scenery from our veranda.

Paeng then checked our sked and suggested that we began our tour of the place.

Our visit in Las Casas was a package inclusive of room accommodation, breakfast, a walking tour, and a one-hour fluvial adventure on a balsa (native raft). Once Paeng confirmed the time for our walking tour, we ended our “photo session” and joined the other guests.

How I wish I could have made lambing to Pogs, who has taken BS Architecture in FEU (Far Eastern University) and who’s a talented painter/artist to chronicle our walking tour. His formal background and a keen eye for aesthetics would have given the different casas their felicitous description. However, I didn’t have the audacity to request it for we were all there to admire and enjoy.

I may not be able to provide the details of each visited casa, but I hope the limited photos I took would give you an idea of how they look. Nonetheless, what was very interesting in this walking tour was the different stories behind each old abode. 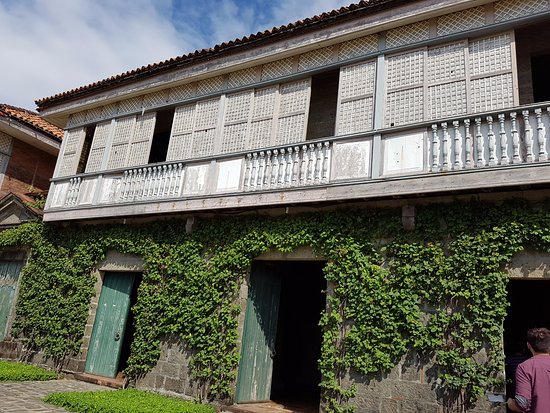 First in the list was Casa Biñan. If you’re from the Philippines you know that Biñan is a city in Laguna, where Jose Rizal lived and received his first education. According to the guide, Casa Biñan was originally owned by Don Lorenzo Alberto Alonzo, the father of Rizal’s mother, Teodora. It’s here where we heard the first juicy chika. Hehehe…I couldn’t remember the complete names of the cast in this story, but the plot was about Teodora’s brother’s wife who had an affair with the captain of the civil guards. To punish his wife, Teodora’s brother imprisoned her in her own bedroom for four years. Teodora became in charge of bringing food to her sister-in-law. One time the incarcerated unfaithful wife put the newly delivered food on the floor and called her dog. The dog died right away after eating it which led to Teodora’s being in jail for two years because of her sister-in-law’s attempted murder accusation.

From the house we were taken to a yard where we watched a short musical play about the life of Pepe (Rizal’s nickname). Our guide didn’t forget to mention that the area was the location of Heneral Luna’s dying scene in the 2015 Filipino historical biopic film. I actually documented this casa and the play, but accidentally deleted them. *sighs* Thus, I resorted to grabbing these two photos.

Casa Quiapo came next. Paeng and I were very much engrossed with the guide’s information and commentaries about this house, being the original location of the University of the Philippines (UP) Fine Arts School before UP Padre Faura. This was owned by Rafael Enriquez who happened to be the first director of the school.

When the students had an exodus to UP Padre Faura, Casa Quiapo became a bowling alley and a coed dormitory in the end. Making us exchange a shocked glance to each other was hearing the miserable story about the ground floor of Casa Quiapo. We learned that the right side of the building used to be a place for toro (live sex show) and even a shooting location for pornographic films while the left side was turned into an abortion clinic.

The third house which we visited was Casa Lubao. If Biñan is Rizal’s bailwick, Lubao is ___? Macapagal’s! Right answer. Did the Macapagals own this heritage house? No. The original owners were Valentin Arrastia and Francisca Salgado. They were Diosdado Macapagal’s benefactors who sent him to school. As told by the guide, Diosdado, who became the fifth president of our country, would often play barefoot in front of this house when he was still young. The Arrastias’ funding of Diosdado’s education also resulted to his mother’s job as a laundry woman and a nursemaid in his sponsors’ house.

I remember our guide feeding us a lot of info about this casa, but I failed to catch the rest of it since Paeng and I had a sudden change of mind. We left the group, including Pogs and Joshua, and explored Las Casas in our own approach and pace! Hahaha…

This choice gave us so much gratification especially me who joined these stone tableaux of Lola Basyang and classic Pinoy games.

We were like little kids enjoying our long-awaited independence during the Spanish colonial era. To be surrounded by these restored Spanish-Filipino houses was like traveling in a  time machine to have that 18th century feel in the Philippines. The owner had succeeded in providing a rare heritage tour in this world-class resort with the other available amenities such as an outdoor pool and a private beach. Evidence of ethnicity was even all over the place!

Then, dinner came around 6:30 pm in La Bella Teodora. I raised two thumbs-up for its palatable dishes! I would treasure this diner for witnessing a meaningful reunion with Edward Cai, a former student/tutee who’s been inviting me to have a cup of coffee since we have reconnected. Never did we know that Las Casas (Edward’s two-day housing before his triathlon in Subic Bay) was waiting for us to meet after more than a decade!

Perhaps, you’re wondering what came next after our meal. Well, we picked an eight o’clock balsa tour! So, be prepared to join us as I narrate this evening fluvial experience and other earthly delights in Las Casas when you again drop by.

Reflections of an inquiring retiree ...

From my desk to yours -

My memoir. Where I cuss a lot.

This Bunny Runs
The Home Wanderer

Possibly the Only WordPress Blog Hosted by Mice